Norwegians love to ski. As Odd Harry Hanssen, Güntner sales engineer in Norway, put it: “We’re born with skis on our feet.” But for those living in and around Oslo, until recently skiing was not always easy to come by. Norway’s capital sits on the shores of a fjord close to the sea, which means the climate is changeable. Even in the middle of winter, snow can’t be guaranteed on the surrounding hills, and the nearest ski resorts are a two-hour drive away.

“We’re born with skis on our feet.” 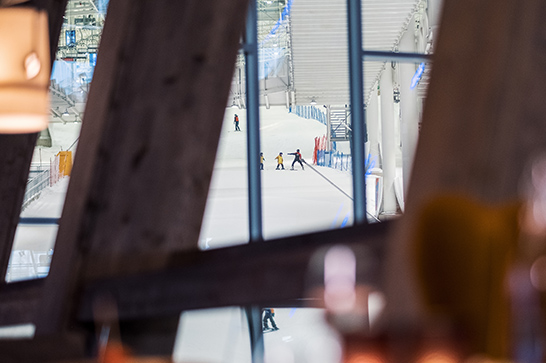 But at the beginning of 2020, Oslo’s ski addicts were given the opportunity to satisfy their longing for the slopes all year round, with the opening of SNØ, a veritable cathedral of winter sports constructed on the side of a hill on the outskirts of the city. The huge, white building juts more than 1640 feet into the surrounding forest and boasts three Alpine slopes, an ice climbing wall and a half-mile cross-country trail suspended from the ceiling. In all, the combined snow area is the equivalent of six full-size soccer pitches. It’s Norway’s first such ski center and one of the biggest in Europe.

SNØ welcomes beginners and experts alike. It’s been used for training by professionals such as slalom champion Sebastian Foss Solevåg and leading snowboarder Marcus Kleveland but it’s also a snowy home away from home for those who are simply missing the pleasure of powder under their skis. That means people like 86-year-old Lilly Sikkerbøl, who can be found on the cross-country course most days, having cycled to the centre on her bike. She grew up on a farm and has skied all her life.
“I feel so at home here,” she says. “After a few laps, I drink coffee and look out the window at others who are skiing. I love watching the kids. I'm impressed with how fearless they are.” Lilly says she needs to take care, as she suffers from asthma and has a pacemaker, but she insists the skiing does her good. She’s always been active and she intends to stay that way.

It goes without saying that temperature control is crucial in an indoor ski centre, and 28 Güntner Cubic VARIO air coolers mounted in the building’s ceiling, plus three gas coolers outside, ensure that there’s a suitable chill in the air, keeping a constant minus two degrees Celsius. According to Hanssen, the sheer scale of the project initially seemed daunting. “In terms of square feet, big warehouses can be larger, but they have many different rooms. This is just one big space”. The decision was made by the refrigeration contractor, Carrier Refrigeration Norway, to use carbon dioxide as the refrigerant, which reduces energy loss and cuts down on electricity use compared to alternatives, as well as being environmentally friendly. The system uses nine tons of carbon dioxide, making it the largest CO2 plant of its kind in Norway.

SNØ’s green credentials even extend beyond the building. Its developers wanted it to be the most environmentally friendly indoor ski resort in the world, so the heat that’s extracted from SNØ doesn’t go to waste, and the centre in effect acts as a giant heat pump for district heating. The area around SNØ is gradually becoming home to a new development of sports-related businesses, hotels, restaurants, shops and apartments.

Eventually the homes and offices of the 6,000 inhabitants of ‘Snow City’ will be heated in part from the excess energy transferred from the ski slope.