Tiandong is a sparsely populated county in China’s Guangxi province. It’s an area of beautiful scenery and simple folk customs, not generally known for the kind of technological advances to be found in other areas of the country. However, Tiandong is currently home to an innovative smart agriculture project that demonstrates how China is increasingly using new technologies to maximize its natural resources.

Over the last two decades, China has witnessed remarkable social and economic development, making it the world’s second largest economy. But with this development has come a large increase in demand for food for its 1.4 billion inhabitants. Efficient crop production is now of paramount importance in the country, which is why initiatives such as the Tiandong project are so crucial. 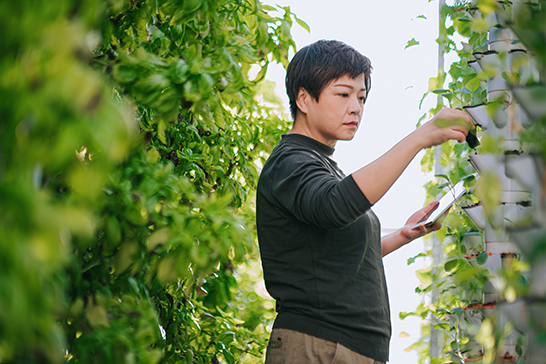 The Tiancheng Agricultural Complex is a project by Guangxi Changjiang Tiancheng Agricultural Group, with help from scientists from Guangxi University of Agricultural Sciences. A spacious greenhouse covering three hectares, it was built with the aim of providing high-quality, healthy vegetable seedlings to growers in the south of China, using cutting-edge technology including automation and an advanced software control system. The science has transformed what used to be a complex operation, making greenhouse operation and maintenance straightforward.

One of the main activities in the greenhouse is the horticultural process of grafting, when the tissues of two separate plants are joined together. This means the fruiting qualities of one plant can be combined with the resilience of another. The highly automated refrigeration system helps to create the right growing conditions for 80 million grafted seedlings of plants such as tomatoes and peppers each year. On top of this, 40 million self-rooted seedlings of a variety of vegetables are also produced. Germination, propagation, grafting, and “healing”—which is the process following grafting when the two plants form a bond—all take place in separate, fully controlled environments.

In the healing room, the intelligent control system maintains the optimum temperature, humidity, light, and time required for specific varieties of grafted plants, thereby improving survival rate. The process is aided by 28 Güntner Dual COMPACT Air Coolers, which not only ensure the temperature remains even throughout the room but also play an important role in maintaining airflow and hygiene.

“The Güntner Dual COMPACT Air Cooler has been optimized to ensure uniform indoor temperature distribution while also maintaining just the right amount of air output, which is very small and stable, and so creates the perfect environment for plants to heal.”

The healing room also has strict hygiene regulations, and specialized staff regularly clean and sanitize the area. As a product that is certified according to HACCP criteria by the German TÜV SÜD, the Güntner Dual COMPACT Air Cooler incorporates special design features that aid the cleaning and sanitization process. “An integrated condensation pump is a unique feature of our Air Coolers,” says Dai. “This not only makes cleaning easier but also gives a tidier appearance and increases the height of the entire space. The hinged pan design also means the Air Coolers can be opened from either side for easy access, cleaning, and inspection.”

Groups of leaders and researchers from all over Guangxi province visit the high-tech seedling production complex on a daily basis to see its advanced technology in action. It points to how the country will meet the demand for food in the future from its increasingly affluent population.

“High-end, modern agricultural projects like this are not only rare in Guangxi, but even in all of China”